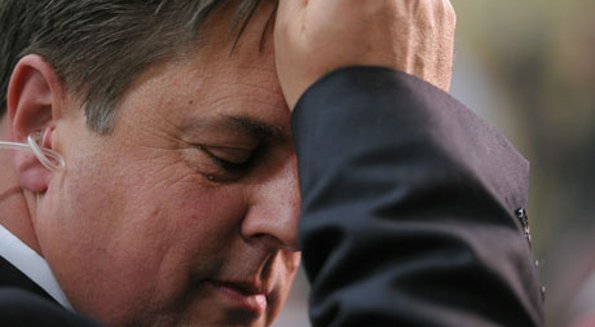 Racist berk Nick Griffin has been ridiculed by hate-spewers all over England today, as it has been revealed his pet dog is in fact a ‘French’ bulldog. Griffin believed the beloved pet was a British Bulldog, which he bought to make him look patriotic and hard. He reportedly purchased the puppy in good faith from a “white male”, so had no reason to believe the man was lying about the bulldog’s breed.

Sources close to the chubby-homophobe say he’s distraught, having grown very attached to the pooch over the last few months, adding, “Nick is struggling to come to terms with the fact that the little fluff ball is actually a socialist, cheese eating, beret wearing ponce. He can’t believe he’s been so expertly deceived.”

BNP ministers are especially angry as Mr Griffin has, “repeatedly picked up French sh*t”, which is, “exactly what we stand against”.

Newspoof understands that Griffin will disown the innocent, defenceless pup in the coming days, freeing up more of his time for hate filled nonsense, pie eating and concealing his sexuality.