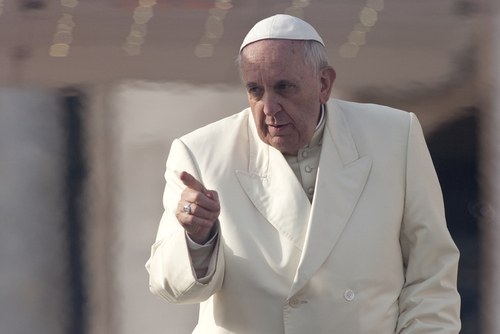 Pope Francis has been asked to return to Sunday School classes and resit a final examination test again after claiming that in the face of provocation one should respond with violence.

After his outburst, it is reported that an aide took him to one side and reminded the Pope that Jesus, “did not frequently retaliate to goads of verbal abuse with bouts of physical aggression.”

It is at this point that the Pope responded, “Bollocks. Jesus would have battered some fuckers.”

In the wake of these reports, it is now understood that Pope Francis has been asked by the Vatican to resit his basic Sunday School classes and final examinations. It has been over 50 years since he last took these tests.

“It seems as though the Pope has maybe forgot some of the fundamental teachings of Christ.” Commented Cardinal Di Moretti.

“We are hoping that by asking him to resit his basic Christianity examinations, he will be reminded of the fundamental teachings of our Lord and will again understand that verbal abuse and violence should not go hand in hand.”

“Unfortunately we have not heard from him since we made the request. We’ve heard reports that he has taken sabbatical in Las Vegas.”