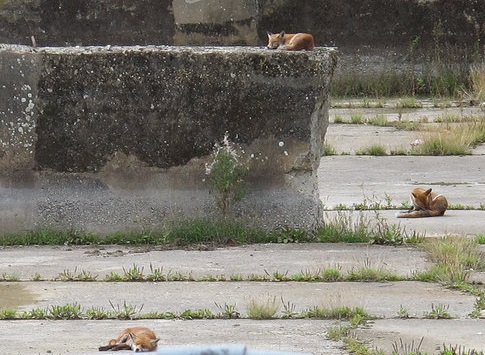 “The foxes have been at it for well over a fortnight now”, local Wimbledon resident Mitch Trinket commented. “They get drugs off the street dealers and have been seen necking discarded booze from outside pubs and off licenses. They really have adapted well to the urban lifestyle.”

There has been much speculation about how the foxes have come to be so acclimatised to a non-rural culture. Screeching at the tops of their lungs, loitering on street corners and getting up to all sorts of sordid behaviour, not quite befitting of what was once a furry woodland creature.

Weird fox expert Jackson O’Hearn offered his assessment, “It would seem that the hunting ban caused fox numbers to rise drastically and drove many of them into the cities looking for food. They now feel quite at home almost anywhere. Plus their only predators are badgers and most of them just get mashed up on the roads by upper-middle class folk in Land Rovers, quite ironic really…”.

We caught up with ex fox hunter, Quinton Wintonthorpe, who is having a rather terrible time of it all. “I’ve been at a complete loose end since the hunting ban, I can’t believe it has been ten years. The foxes were once on the brink of extinction, now I worry they might mug me and my friends when we come into the city to make fun of poor people.”

However, in new government measures introduced to resolve the influx of foxes on the streets, special ‘urban hunting permits’ may be introduced to ex-hunters like Wintonthorpe, to help reduce the foxes exponential growth.

“I’m not sure about it though, it was alright when it was 50 men riding 50 horses with 50 hounds against one fox, but there are multiple foxes in the cities now. It’s really not fair.”